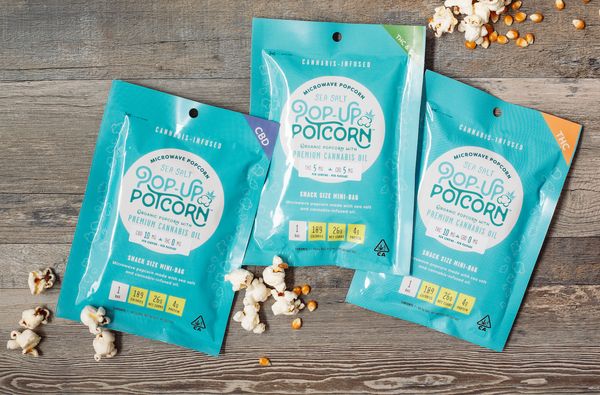 Ever wonder how your mom is able to bingewatch crappy Hallmark Christmas movies even in the middle of summer? Well, her secret probably isn’t marijuana-infused popcorn, but wouldn’t it be great if it was?

Check out the complete list of other odd Mother’s Day Gifts.

I give a major shout-out to Pop-Up Potcorn for their innovation and creativity. Each microwavable bag comes ready to go — just pop the snack-sized mini-sack in the microwave and wait until the last of those kernels pop. I like my popcorn buttery and salty, and I’ll even take some pepper from time to time, but if you’re into light seasoning, Sea Salt Pop-Up Potcorn is ready to go as-is.

I started with their 5mg THC:5mg CBD bag and hit ‘play.’ Forty-five minutes in, I’m feeling comfy. The high isn’t heavy, making Pop-Up Potcorn a perfect choice if you get an edible hangover. Film night is on!

Who doesn’t love popcorn? In an exciting time for the recreational cannabis consumer, Pop-Up Potcorn is a satisfying way to elevate and alleviate. It’s the first cannabis-infused microwaveable bag of popcorn that’s simple, salty, and good for you! And best of all, Pop-Up Potcorn hits “the sweet spot” of consistent micro-dosing with just 5-10 mgs of cannabis per bag.

Pop-Up Potcorn is not intimidating for consumers returning to cannabis or who are just beginning to explore its uplifting effects. Unlike flower, vape cartridges or super-strength edibles, Pop-Up Potcorn is a mild edible that won’t cause consumers to experience the “Oh no, I’m too high” feeling. Thanks to its thoughtful dosage and 100 percent pure cannabis extract, Pop-Up Potcorn is reliably potent without being overwhelming.

As the first microwaveable bag of cannabis infused popcorn, it comes out of the bag steaming hot and ready to eat. For the foodie looking for a flavorful snack, Potcorn tastes much better than already popped infused popcorn, which often is gummy and stale.

Pop-Up Potcorn is perfect for sharing and socializing at home. Serve as a fun hors d’oeuvre at a BBQ or fight over the bowl with your sweetheart during movie night. As a poppin’ plus, Potcorn does not have an overpowering cannabis odor, and is discreet enough for snacking on at work.

Great for people who want to protect their skin & lungs and do not want to smoke or vape cannabis.

Did we mention it’s popcorn…who doesn’t love popcorn? And if cannabis is in it, even better! Pop-Up Potcorn is ideal for consumers who enjoy the taste of good food, want a well-proportioned infused snack, and enjoy the feeling that comes with.

Pop-Up Potcorn retails for about $8.00 per bag, and will be available through Sava, a delivery service based in Northern California and at select dispensaries near you in California.

For press inquiries, please contact Andrea Burnett at The 4twenty Group at 650-207-0917 or andrea@4twentygroup.com.

Founded in 2018, Pop-Up Potcorn is a Northern California-based company. Unlike many edibles with small portion sizes and added sugar, Pop-Up’s low dose, single-serving microwavable mini-bags let you enjoy a complete bag of popcorn without worrying about overindulging or overdosing. Their potcorn is crafted with organic popcorn and sustainably sourced ingredients and made without artificial flavors. Potcorn’s snack-size bags come in 3 different cannabis oil blends, each featuring manageable 10mg doses. Learn More

Marijuana-infused Pop-Up Potcorn pops the bubble of microwave mediocrity for an exceptionally tasty and terrific treat.

Popcorn overeaters nationwide debate whether microwave popcorn is toxic garbage or a perfectly yummy alternative to movie theater popcorn. But a new, cannabis-infused microwave popcorn packs a crazy-delicious formula that equals movie-theater popcorn quality —  and also gets you deeply and profoundly high while you’re chowing it down.

Pop-Up Potcorn is a novel and uniquely delectable microwave popcorn coming to Bay Area dispensaries next month. This critic assumed that nothing would ever be as tasty as previous cannabis-infused popcorn offerings from Auntie Dolores and Korova Edibles. But oh, were we blown away by Pop-Up Potcorn’s incomparably potent cannabis composition and flavoring.

Pop-Up Potcorn looks, cooks, and behaves like any normal bag of microwave popcorn. But the manufacturer has formulated an immaculately delicious mix in which you can totally taste the marijuana flavor expertly blended into the buttery recipe.

This popcorn succeeds with a particularly tasty marijuana-butter concoction, and the 10-milligram single-serving packs a punch much stronger than its promised billing. This potcorn’s cannabis distillate comes from Weird Science Labs, whose pure formulations deliver highs above and beyond their labeled doses that hit your system in exceptionally quick fashion.

Pop-Up Potcorn’s top-notch infused microwave popcorn pulls off a seasoning coup with a mix of high-quality palm oil and a well-measured infusion of gourmet sea salt. The makers clearly cared more about flavor than mass-production efficiency, and it shows in their painstakingly developed microwave popcorn recipe.

Pop-Up Potcorn’s kernels are all grown in California, and they’re certified organic and free of any genetically modified organisms. Those distinctions may or may not mean anything to the microwave popcorn crowd, but it’s a nice thing to know.

Sure, Pop-Up Potcorn is probably not as good as a bowl of fresh popcorn seasoned by a true expert in cannabis butter preparation. But most of us are not true experts in cannabis butter preparation, and we never will be. This Potcorn is an excellent low-maintenance, five-star infused treat for those of us who are complete butterfingers in the kitchen.

Potency: Fasten your seat belts. The 10-milligram serving is deceptively dank, and one person consuming the whole bag will feel like they’ve ingested a 40- or 50-milligram high.

Smell: Not at all weed-y, just the standard microwave popcorn scent.

Taste: Vastly better than most microwave popcorns! A recognizable marijuana taste is rarely so flavorful.

Appearance: Just like a fresh-popped bag of Orville’s, Newman’s Own, or Pop Secret, with no visible particles of marijuana.

Medical Application: Streaming service and chill on a Friday night.

Effect: Not to sound corny, but give this potcorn a pop and it may instantly become one of your favorite edible snacks.

Sava Delivery and at local dispensaries in July.

Request additional information about our brand for media publications.